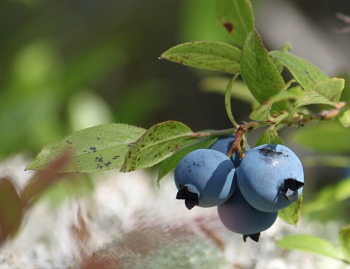 (UPDATE: In 2020, Blue Harvest Farms transferred from a u-pick for the general public to a membership u-pick. We LOVE how small independent eco-farms can adapt this way.)

To some, it was one of the most shocking statements ever told by a television news reporter during the Great Recession of 2008:  A certain type of business was doing well financially – small fruit farms. And the particular small farm he chose to focus on, Blue Harvest Farms, happened to be on land damaged by hurricane Katrina, about 50 miles from New Orleans.

A news reporter named Michael Danna announced on a television news segment entitled, “This Week in Louisiana Agriculture,” that “The blues are making one farmer see green.”

Blue Harvest Farms is a 7-acre u-pick blueberry farm in Covington, Louisiana. With a combination of uniquely delicious blueberries suited to the South, early to late ripening dates, and a surprise turn towards agritourism in the form of a u-pick selling system, Blue Harvest Farms had a remarkable berry season even before the bushes hit peak production. And in some ways, it was quite a surprise even to the farm’s owner -- Chris Pinto, and his wife, Rachael, two sons Joshua and Wyatt and daughter, Sophie -- that the family now operates a u-pick blueberry patch. Chris started out with a dream to retire on a farm some day, even though he had zero farming experience. He does, though, have extensive business experience. But even after he decided to aim for a retirement farm, he was still never planning to grow blueberries.

How it started – From pine to pecan to blueberries

Blue Harvest Farms grows on an area that used to grow pine trees, which helped make the soil already naturally pH perfect, seeing as though blueberries are natives of evergreen forest edges. But the farm plan started out to be pecans. “I got my inspiration to farm from a summer I spent in middle Georgia,” says Chris. “That summer, I encountered magnificent pecan orchards and vowed to one day live on a pecan orchard. Fast forward 15 years into a successful business career, I had the luxury of moving back to my native New Orleans. We chose to locate ourselves on the Northshore (a typical suburban neighborhood –golf courses and all) which is more suburbia or bedroom community vs. the inner city.” Chris says that he began the process of realizing his dream of living on a pecan orchard by buying a large 288-acre parcel of land about 30 minutes north of his new home. He eventually cleared a small portion for a future retirement cabin, his future farm, and a few other related projects. But he left 250 of the acres wild, even though Katrina caused damage to the land.

“After spending about six months exploring the property like a child exploring a new found ditch, I began my research on pecans,” says Chris. “I did not get far – my first phone call was to an irrigation professional who told me at 60+ he was by far the youngest member of the Louisiana Pecan Growers association, and that I would be about 80 when my orchard would look like the orchard in my dreams. As he hung up the phone he said to research blueberries and to call a gentleman (Louis Monterde) in Mississippi who was the president of the Miss-Lou Blueberry Growers Cooperative and also owner of a blueberry packing plant. From there the adventure began with visits to Louis’ farm and Tim Gogins farm in Mississippi. Mississippi state extension professor John Braswell, a blueberry expert, was also very helpful when I started, giving me insight on best practices.”

So, as Chris says, the blueberry farm adventure began. At first, he was going to be a commercial blueberry farmer rather than a u-pick. He chose to plant Premier, Brightwell, and Powderblue varieties. “After discussing the attributes and performance with other nearby farmers, I selected Premier (50% of field) because of flavor, size (large) and ripening time (early),” Chris explains. “Brightwell and Powderblue make up the remaining 50%. Since I was not planning to have a u-pick, I chose Powderblue as a late season berry to extend my season. For a u-pick in the South, you want to get in and out of the field as early as possible to not expose people to the brutal heat of July. But the variety is so prolific that it is worth dealing with the July heat to harvest the berry. And, multiple varieties are required to effectively cross pollinate.”

Starting on his land that had been cleared of all trees and stumps, Chris shares his exact steps for creating the blueberry farm:

- First, he marked the 41 rows he’d be planting to blueberries.

- Then, he built the rows with a row builder.

- Next he applied pine bark mulch to the rows.

- After that, he tilled in the pine bark.

- He rebuilt the rows.

- He then planted the 5000 1-gallon bushes by hand with a 2-man crew using a post hole digger.

- Once planted, he ran drip irrigation line down each row.

- Finally, he applied pine bark mulch again over the rows.

The surprise turn towards u-pick

Chris was originally going to grow blueberries for commercial outlets, but his young fields had a better idea. Though blueberries can take at least six years to full production, Chris was surprised to find quite a few berries on the bushes long before the projected year of full capacity. Thinking he had to do something with all those berries, he contacted as many people as he could from his list of friends and family to come harvest the berries. They picked about 4000 pounds out of the young field. The kids and adults alike had so much fun, that the commercial blueberry field was reborn as a u-pick agritourism farm. In his first year selling the berries, he charged $10 a gallon for customer picked berries. So financial payback is already on its way, and the blueberry bushes haven’t even reached full production yet. Chris says that so far, he hasn’t had a problem with birds helping themselves to the berries, though he realizes he may have to deal with that down the road.

Some people find their small farm dream accidentally, some through focused intention, and some, like Chris, from a combination. But future micro eco-farmers, take note: Chris feels we’re needing and seeing more pick-your-own farms because more and more people are questioning where their food comes from. He says that once people discover his blueberries, they want to know if he has even more to offer, such as other fruits or vegetables, because people want an organic source and they enjoy harvesting them with their kids. Perhaps a society of small local farms is on the comeback. There certainly seems to be customers waiting. 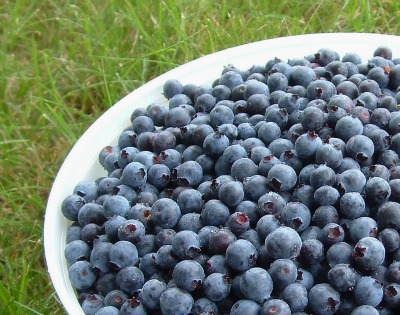 Want to start your own blueberry plantation?

Whether that might be five bushes in the back yard or your own small acreage blueberry farm, here are some pros and cons to consider:

Sell your crops to chefs and restaurants

Start or improve a farmers market or roadside stand