Peace with Predators: Humans learning to co-exist with, and even benefit from, coyotes (and other predators) 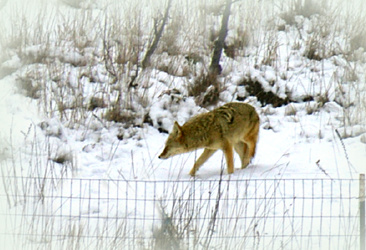 We love nature when worms eliminate our garbage, do our rototilling and enrich our soils. As bees and butterflies float by to pollinate our cutting flowers, our geese chase away the door-to-door salesman, and our goats trim the wild brambles. We relax back in these moments and enjoy nature as our partner. There's a deep, building sense that we belong, that we're partners in the building of some grand plan that wants us here, and wants us to stay and co-create it.

Until the coyote attacks our sheep or the hawk flies off with our prize laying hen, that peaceful 'one' splits in two: Us vs. Them. Now it's war.

Peace amidst predators, even… coyotes? Is that possible? While we're making progress with livestock guardian dogs, coyotes are still shot in unguarded farms to keep them from killing pets and farm animals. The problem is, when one is shot, another soon fills its spot. It's a natural phenomenon observed for years. Jonathan G. Way, PhD www.easterncoyoteresearch.com. (Jon), is a wildlife biologist, high school science teacher, and author of Suburban Howls, which documents his incredible field studies on coyotes.

"If a resident coyote group member(s) dies," Jon says, "it seems that coyotes communicate very quickly that this area has an opening, and either the dead coyote's mate attracts a new coyote and/or a transient/nomad finds that there is an opening because of a lack of scent marking and/or howling in a given area."

But unless there's an invited opening for a new one as in the above explained situation, biologists know that coyotes and other predators are extremely territorial, and will vehemently protect their territory from other canines including other coyotes.

We also know that coyotes are sometimes loners by necessity, and can survive this way. "Very often," says Jon, "pups or yearlings, when they decide to leave their parents, are loners (hence nomad/transient). They seem to be nomadic until they can find a territorial opening."

But intriguingly, when a wild predator has been conditioned to avoid a certain food source it previously may have found desirable, scientists have witnessed these animals inadvertently 'protecting' that food source from others of their species. In other words, when successfully using a non-lethal one-time substance described below to condition a farm visiting coyote to be repulsed for life by sheep or chicken (for example), that coyote will still hunt through and around those farm animals, but won't hunt and kill them. And they'll defend that territory from other coyotes and competing predators which aren't conditioned, simply because it's their instinct to defend their territory.

It's described here by Lowell K. Nicolaus, PhD, who used the method to condition wild ravens to avoid eating certain eggs: "At the refuge, breeding pairs of ravens defended their territory against intrusions by the many non-breeding ravens. In effect, treated (conditioned not to eat the eggs) territorial ravens that refused to consume the eggs themselves, protected eggs from being eaten by other ravens that had not been treated." Many predators besides ravens and coyotes have proven this conditioning method out.

The idea comes from knowing that a food source that has become tainted with disease or poison that makes the coyote, raven or other predator ill must and will be avoided for life, assuming the animal survives the ordeal. A mechanism within the animal triggers a virtual lifetime inner rewiring that stops the animal cold from even considering that food again. Far, far different than, say, putting hot sauce on a coyotes desired food, like a raw chicken leg, hoping to teach it a lesson. The pain from the hot sauce will be remembered, but the food without the hot sauce is still highly desired. The predator in that case will eventually try again for that food source, just being a little more cautious. But with a process called CTA -- Conditioned Taste Aversion -- the predator stops liking chicken, period. Hot sauce or no hot sauce. And it appears to be for life.

Here's what we know so far: Coyotes, as mentioned, will protect their territory (and yours) from other coyotes and dogs. If the resident coyotes that frequent your property are conditioned to leave certain livestock alone, they will keep other unconditioned coyotes out of the territory which would otherwise cause trouble. 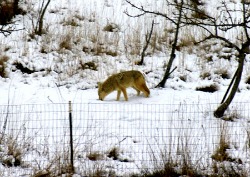 Conditioned Taste Aversion -- CTA -- is different from other methods using similar words. It was proven with impeccable studies following all scientific protocols, and proved a great success, according to Dr. Lowell K. Nicolaus. It was later "retested" without following the correct procedures that make it work, and incorrectly stated to be ineffective. Plus, it was confused with similar but less effective methods, causing conservation groups such as the Fish and Wildlife, and Department of Agriculture to dismiss it, while they continue to offer ineffective methods such as shooting and trapping. Dr. Lowell K. Nicolaus partially explains it here with a piece from his work which illustrates why specific techniques must be followed, and when done, why it works so well:

How is CTA learned? For predators, eating follows an inevitable sequence. It starts with food seeking (appetitive) foraging behavior controlled largely by the fore brain. It is flexible behavior because it has to be. Foragers almost never know where food actually is or what it will do once it's located. By the time food actually gets into the mouth the brain stem largely takes over (salivation and gastric secretion begin) and this includes food taste sensation going to the brain stem. If the food has not previously been linked with illness, then the brain stem will allow it to remain in the mouth and to be swallowed.

Next, it begins to be digested further.


If the outcome of digestion and absorption is "good" (nutrient repletion), then all is well and this taste will be "remembered" by the brain stem as acceptable and so again be welcomed in the future. Since the food is still desirable, external cues associated with this food will continue to be sought by the animal as it forages in the external environment.

That is, the unconscious brain stem decides what food the conscious fore brain "wants" to pursue.

As they say, "You might be able to control what you do, but you can't so easily control what you want to do!" He goes on to explain those who dismiss CTA wrongly often try to retrain the fore brain of the animal, rather than the gut and brain stem, to try to obtain the desired conditioning, and that often doesn't work.

Rather, to make it work, the absorption of food (that starts out tasting good to the predator) must create a bad experience after swallowing, then the vagus nerve from the gut sends signals of distress to a specific area of the brain stem. If the animal recovers, there is a permanent lasting memory not only to avoid, but to heatedly dislike, that food.

So, when done correctly, feeding a piece of mutton carefully injected with a specific non-taste-detectable substance, then wrapped in a little sheep wool can keep coyotes and wolves alive and part of nature, but condition them to avoid sheep like the plague. Nicolaus further explains that similar human attempts, such as tainting the food with hot sauce, or inflicting other punishments for eating the foods, haven't had the same effect as this one that works so well with that specific area of the brain. He says that it's not just the chunk of meat the animal learns to avoid after being fed the injected food, but it can also learn to avoid the distant living animal associated with it.

He says the "tainting" substance must be undetectable (which isn't the case with, say, adding hot sauce to the food). And that's partly why the follow-up testing was done incorrectly in the flawed tests and therefore failed to produce the same results. They added the illness-inducing substance in a manner that made the taste of that substance detectable. So, therefore, it was ineffective. The brain stem taught the forebrain to avoid animals with that substance in it, but not animals free of that substance. Meaning the predator learns to avoid the detected substance, but not the animal itself when the substance isn't added.

At this point, we can also see that poisoning the food to kill the coyote does us no good. The animal dies, and a new animal that never learned to avoid that food, quickly takes its place and starts the problem all over again. Instead, if the coyote stays alive but learns to avoid that food source, it will in essence, protect its territory from other coyotes that aren't conditioned.

As stated by Nicolaus, "For more than a century, coyotes have been extensively killed in the U.S. but both their range and their populations are actually expanding." We can also see that residents in urban settings who set out food for coyotes or allow them to eat their garbage and therefore find them coming closer to kill their cats and small dogs, may do better to do the opposite: Train them to find aversion to urban foods including those they don't intend to feed them: garbage and pets. Unfortunately, instead, they are training them to associate humans and their yards with remembered eating pleasure. In one rare case, a retired park ranger living in a rural setting fed an injured coyote deceased, non-poisoned native wild rodents, and when the coyote recovered, she continued to leave the ranger's water fowl alone, hypothetically because waterfowl had never been part of her diet growing up -- but would hunt rodents amidst them. This was a different situation than when people purposely or casually allow predators to consume pets and human created food.

Black bears, ferrel domestic cats, ferrets, cougars, hawks and other predatory birds, wolves, and others besides coyotes have all been proven to effectively be conditioned with CTA. Predators have even been seen to gag and vomit when being put near the food source they were conditioned to dislike.

CTA, when tested and used properly, and when not confused with other methods that use similar words like 'aversion' in their names, may hold promise for all farmers, including regenerative farmers and ranchers.

Update: Originally we sent readers of this article directly to Dr. Lowell Nicolaus and his website on this topic. But he passed away in early 2017, so we now offer this link to his past work and colleagues as a starting point for those who want to pursue CTA further: https://www.apa.org/monitor/2010/11/mexican-wolf